“The longer – the better” will say anyone you ask regarding rollformingmachine design. Having more than enough quantity of rollforming stations, you can gradually make anykind of profile with no stress, waives and ripples. However, each additionalfeet of the machine is not only about machine cost and delivery terms but alsorising demands for the workshop space, power requirements, handling weight, and lack of mobility. Intensive method of therollforming design helps us to build small machines with better budget, termsand gives a chance to small businesses to do the things that only big guyscould afford before. Below you can read engineering …

To show the differencewe designed rollers for this profile in 7 passes with Regular Rollforming (RR)method and Intensive Deformation (ID) method.

With Regular Rollforming (RR) design bends gosuccessively one by one starting from the edge to center of the material(pic.#2). 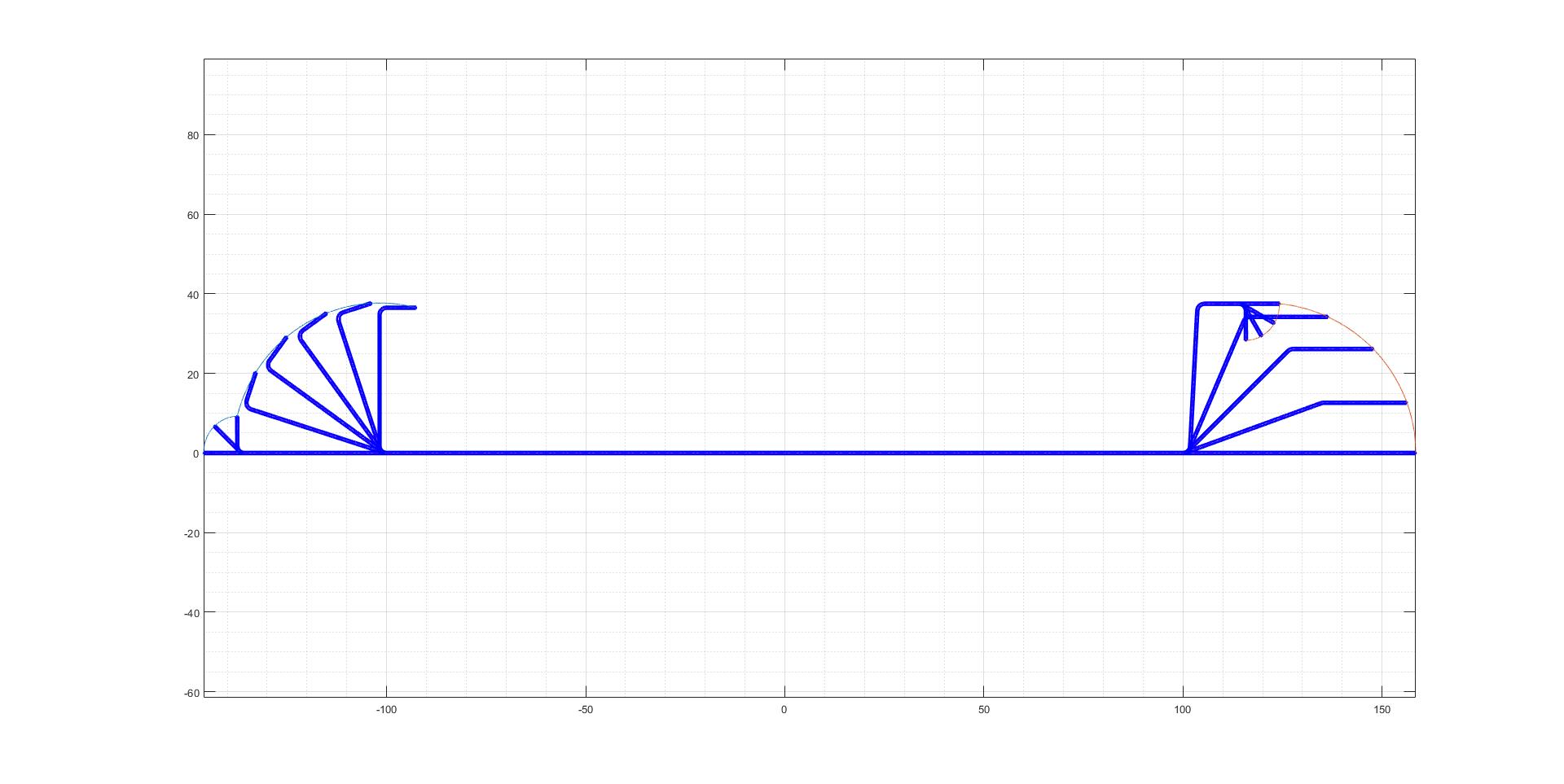 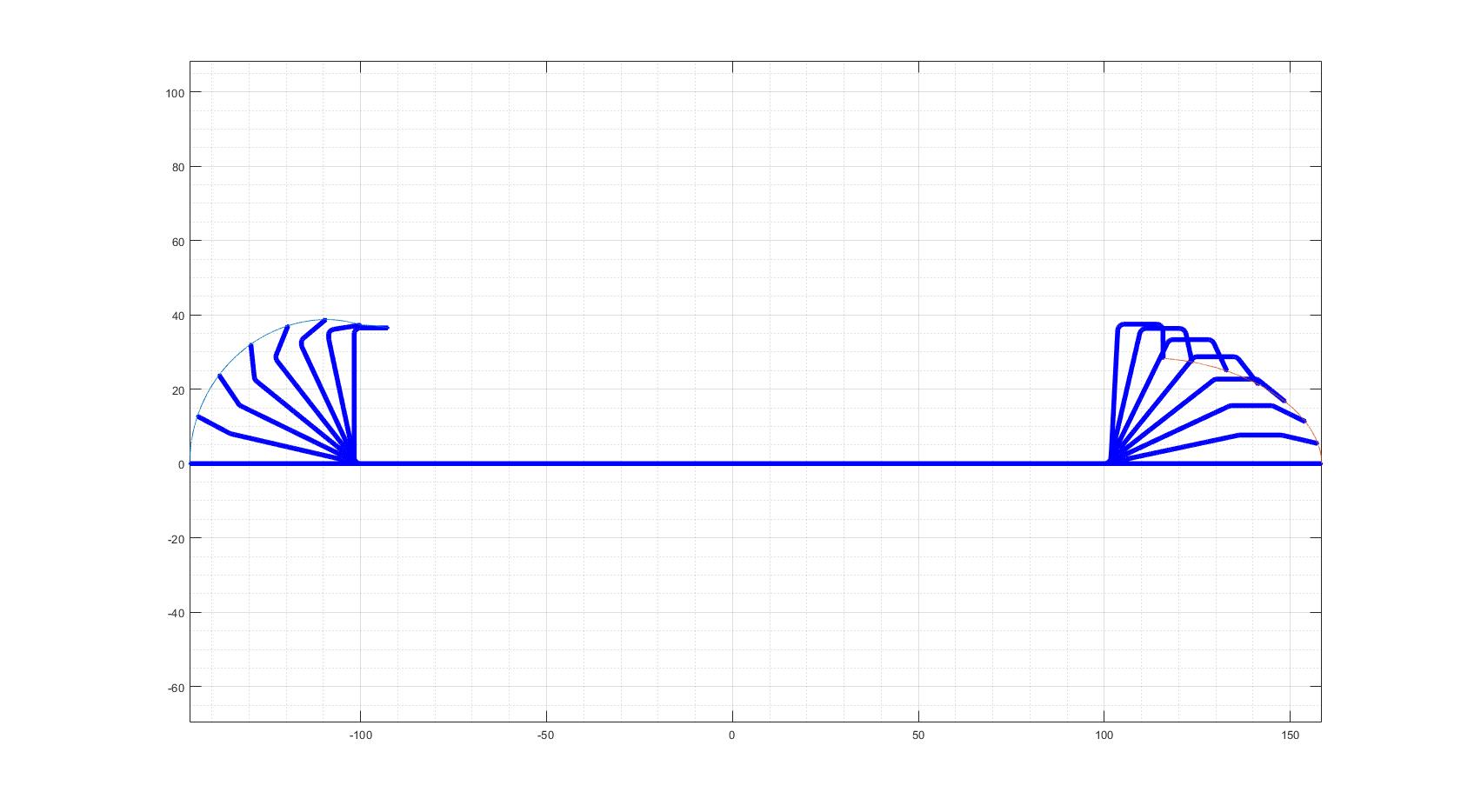 
As raw material we use 24 Gauge steel ASTM A653-96.
The tensile strength is 210 MPa, the Poisson's ratio is 0.3, the yield strength is 350 MPa, the hardening modulus in the plastic region is 587 MPa. Modeling of the deformation process was carried out in the Ls-Dyna program. Modeling the working tool only simulated the working surface of the calibrated rollers. In this case, the drive has only lower rollers, and the upper ones not propelled. In modeling, the feeding rollers used as first pass with no bands on, therefore eight stands are present in the model.
The shape of the material in formed state during the molding process is shown in Pic. 4, the upper rollers were hidden. Simulation results demonstrate loss of stability is on both edges of the workpiece. Pic. 4b shows the formation of ripples on the left edge between 4 and 5 passes. Pic. 4c demonstrate formation of a kink at the right edge as workpiece goes between 6 and 7 passes. 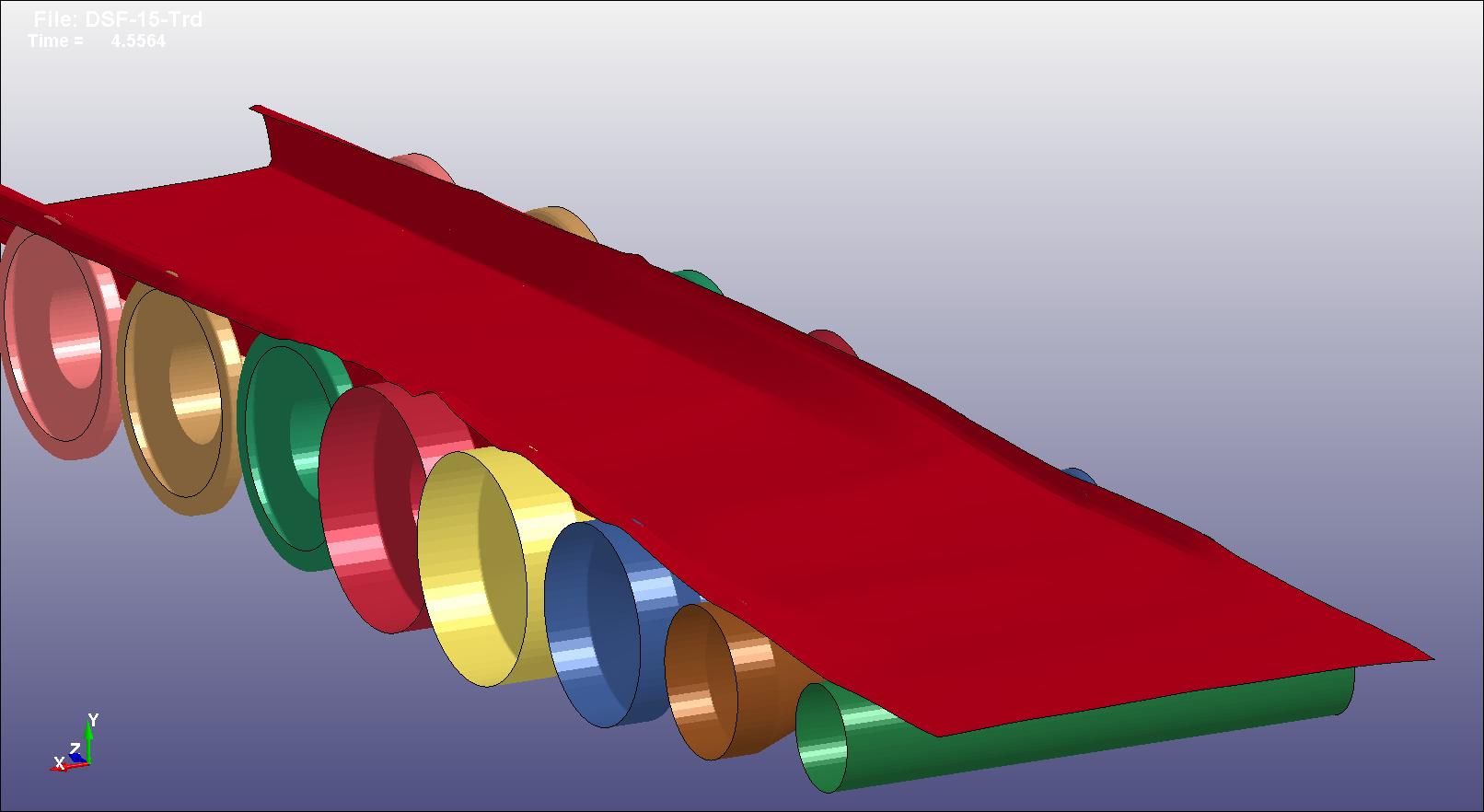 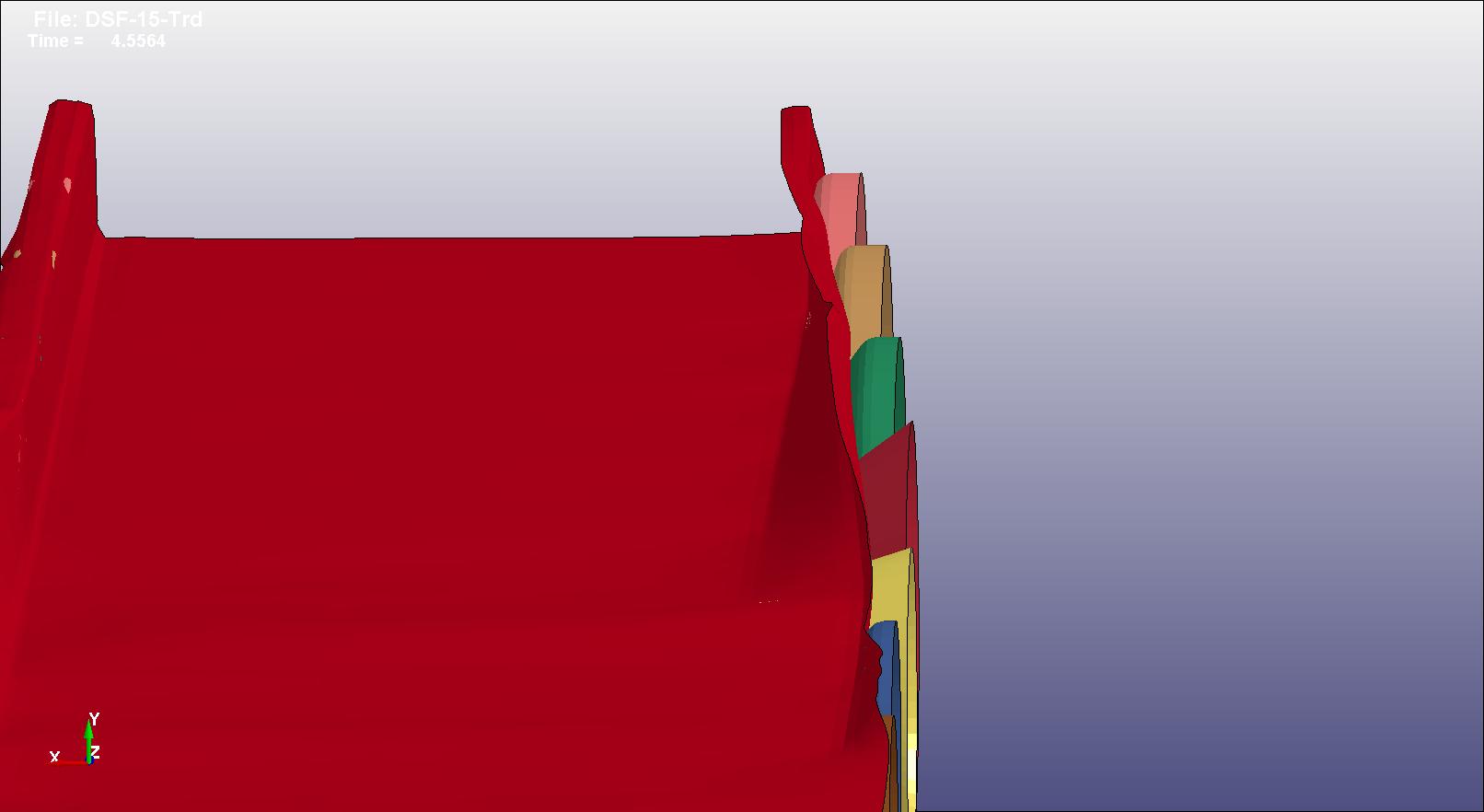 Pic. 5. Equivalent stresses in the workpiece during the forming process according to the conventional scheme.

Picture 6 shows the values of longitudinal stresses. You can see on the figure that the greatest longitudinal tensile stresses act in the edges of the workpiece as it passes through the second and third passes. 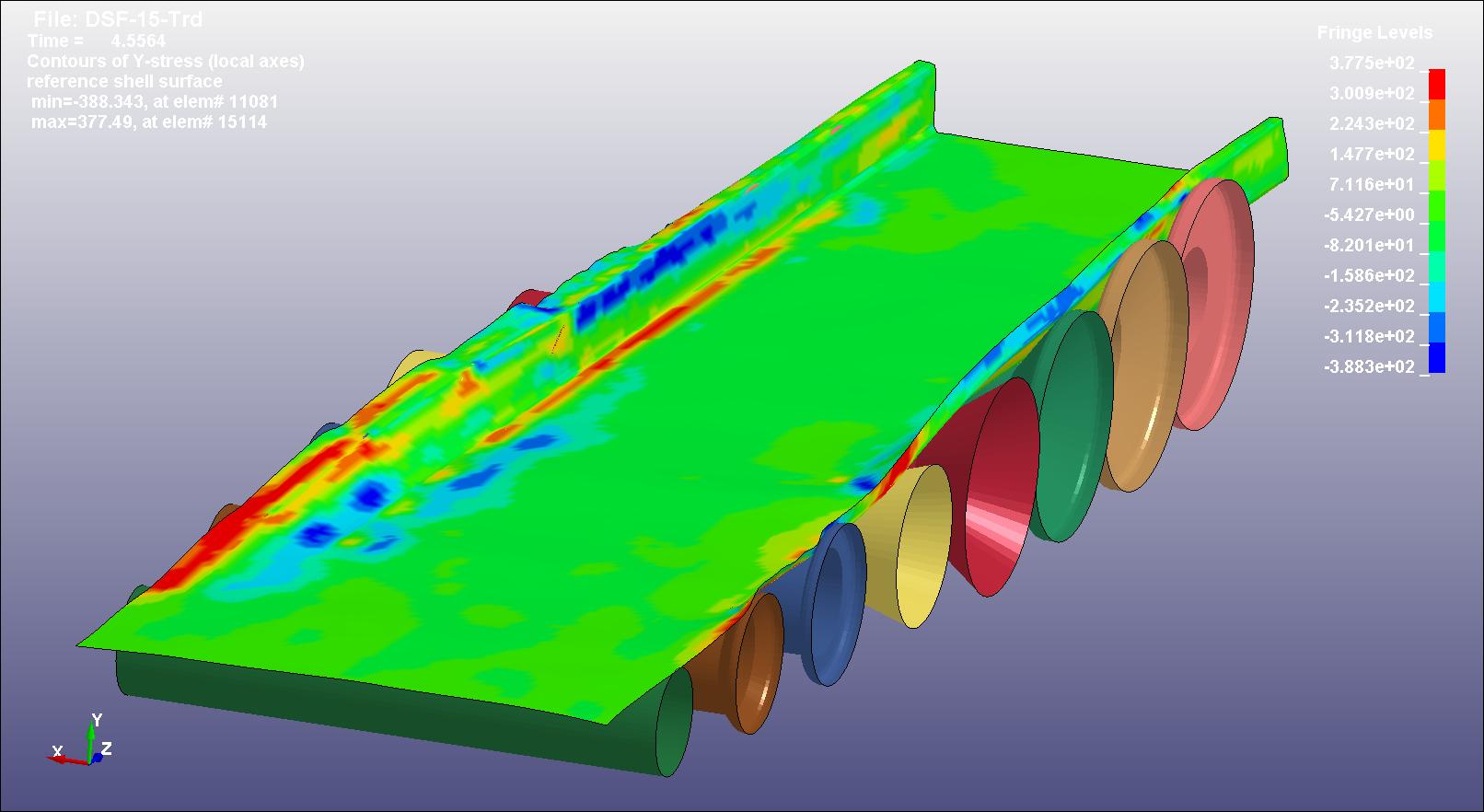 Pic. 6. Longitudinal stresses in the workpiece during the forming process according to the Regular Rollforming method.


Picture 7 shows the strain values in longitudinal direction. The greatest deformation values reach 2%. Such a value is higher than the elastic limit, therefore residual deformations will appear in the workpiece, which will subsequently lead to undesirable deformation of the edge in the form of a ripple. 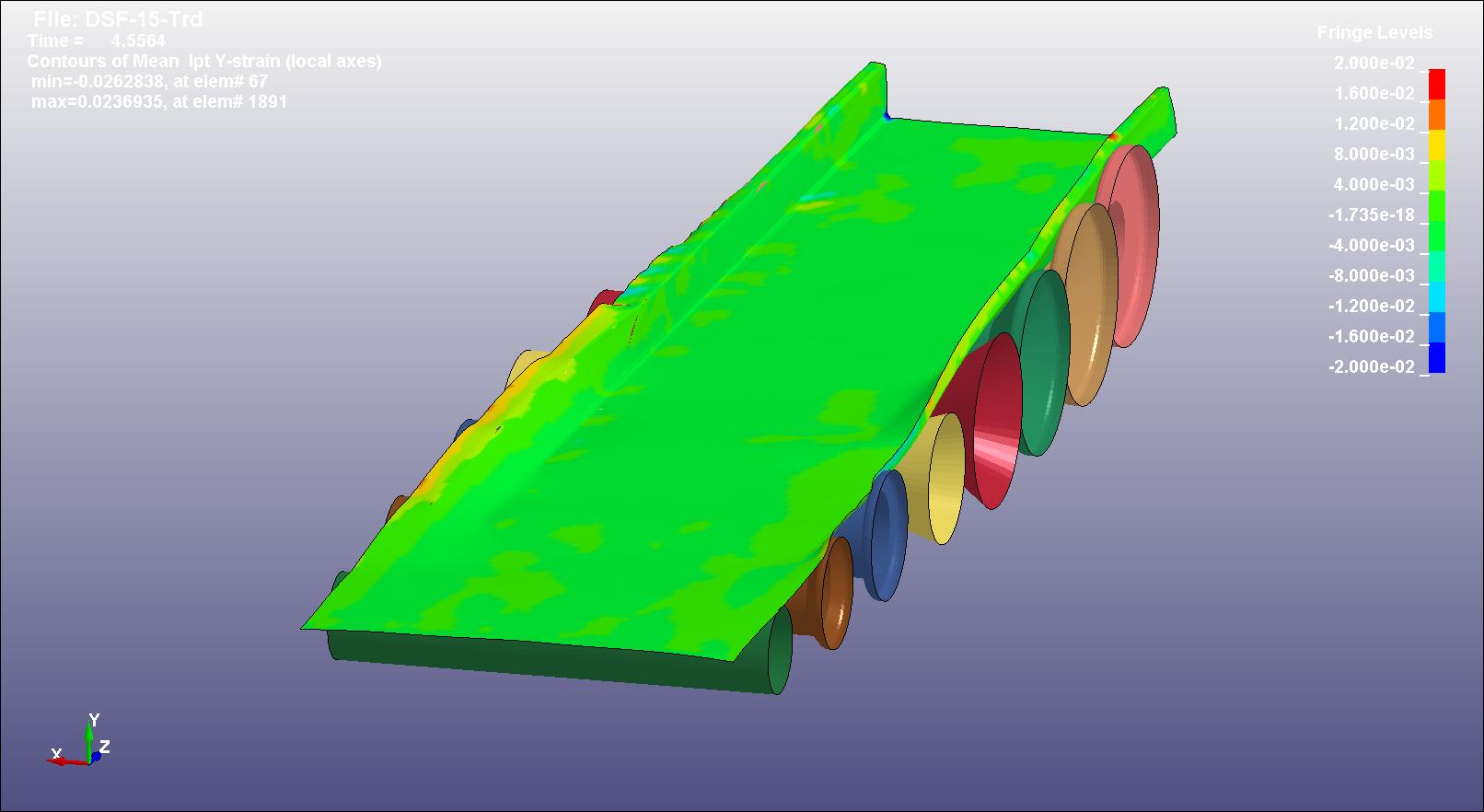 Pic. 7. Longitudinal deformations in the workpiece during the forming process according to the Regular Rollforming method.